A big thanks to everyone who attended yesterday – a wonderful chatty group as always.  And thank you to eLearning Industry for hosting our discussion of learning technology and theory!

You can watch the recording or take a look at the slides:

The slide deck suggests some books that relate to the topics of skills and competencies.  I also mentioned articles on various topics, so here are those additional links:

How do you encourage a person to learn without telling them what to believe? How do you assess skills without asking learners to memorize facts? It’s all in the learning environment.

Many learning professionals incorporate constructivism into their instructional design approach. Constructivism seeks to actively involve the learner in a process of meaning and knowledge construction. Learners are exposed to an environment and framework that allows them to derive meaning as opposed to passively receiving information.

New in Adobe Captivate 2019, overlay slides enable you to add a slide to a specific frame along an interactive video’s Timeline. While the video is playing, when it reaches that frame, it pauses, and the slide appears as an overlay.
The video resumes when the overlay ends. It may continue from where it left off or from another bookmarked frame along its Timeline (either back or forward).
Adobe provides an excellent example in the Resources section. It’s called “2019 Release – Interactive Video”.Following a similar technique, I created a short course titled “Are You Ready to Learn?”

In this article, I’ll discuss some of the questions which led me to experiment with overlay slides, and the answers I discovered through testing.

Question: Can an overlay and a bookmark exist in the same location along the Timeline such that it is possible to jump directly from one overlay to another?
Answer:
Yes.
Initially, I created bookmarks and overlays separately. Then, I accidentally added a bookmark by double-clicking a frame that was already inhabited by an overlay, and “voila!” I had a bookmarked overlay.
I also followed the same process to add overlays to existing bookmarks.

Bookmarks and overlays on the Timeline.

Question: Are overlays slides required to have a background?
Answer: No.
These images illustrate the effect of overlays slides with and without backgrounds. As you can see, backgrounds create a focal point and can be visually appealing, but they are not essential.

An overlaid slide without a background.

An overlaid slide with a transparent background.

This image shows custom, scored quiz questions I added to some of the overlay slides. In this situation, the scoring does nothing (because they are acting as knowledge checks), but it is possible.

An animation on an overlay slide.

Animations on an overlay slide.

The overlay slide’s audio takes over (very smoothly), as does its closed captions.

Independent audio and closed captions on an overlay slide.

Have you been forced into an order-taking role by stakeholders that don’t value effective learning? Are you tired of importing PowerPoints into authoring tools? What you need is a tool that will help guide your conversations toward a better learning outcome: The 7 Better Learning Principles.
This post was first published on eLearning Industry.

I’ve added several example scenarios to this collection, along with discussion to help you evaluate the designers’ choices. 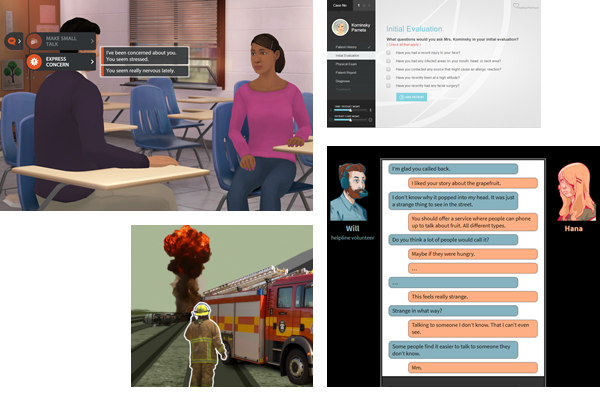 We examine these types of activities in my scenario design course, which begins the first week of September. In this four-week course, you’ll immediately apply what you’re learning to a project on your job and get personal feedback from me. This is a popular course with limited seats, so register soon.

Information overload has an adverse effect on the learning process and retention. Employees tend to lose interest in your course when it gets flooded with content. But with the right eLearning design, you can create quality content for your learners.
This post was first published on eLearning Industry.

EI Design secures another global ranking, #2 position, in the recently announced list of Top eLearning Content Providers for Blended Learning for 2019 by eLearning Industry Inc.
This post was first published on eLearning Industry.