If you want to sell online courses, you need a platform with strong eCommerce features. As a Learning Management System that was originally developed for training companies, LearnUpon specializes in offering the best sales and marketing tools for eLearning.

“The educational ecosystem is expanding dramatically. Still, there is not widespread public awareness of some of the key resources that are becoming available. Noteworthy majorities of Americans say they are “not too” or “not at all” aware of these things:

We are long past the online coursework and training that involves video lectures, unit plans and assignments, and exams. This type of instruction is no longer embraced by learners, and those who design eLearning coursework for students or business training are embracing new strategies and technology very rapidly now. It is a new day for eLearning, and the self-directed learner will have access to all of these new innovations.

In today’s world, teachers and education leaders have the thankless job of not only educating students and instilling knowledge and skills inside their young minds, but also of preparing them for all the challenges that are waiting for them out there, in the real world. It is essential, because it is no longer the world their parents used to live in, and because everything around them is undergoing constant and swift change. This means simply having students know something is not enough. They need to be able think for themselves and approach things critically, which is where deeper learning comes in. 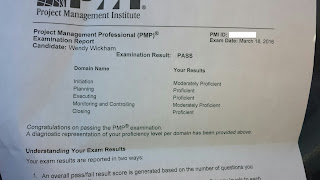 In March, I earned my PMP.

For the final push, I took advantage of an opportunity to take a test prep bootcamp through Cheetah Learning.  The bootcamp came highly regarded by our project managers – so my management was kind enough to spring the money for me to take it before the exam.

Cheetah’s PMP Bootcamp has some really interesting features that I have not seen in other bootcamps of this sort.

1) Single-minded focus.  You are there to pass the test.

What this means?  It means you do not question the PMI.  At least – not for the next week.

2) Your heavy lifting occurs before the class.  Memorizing the mind map.

Before you show up, you are expected to memorize a mind map and be able to draw it on demand day 1 of the bootcamp.  The mind map will serve as a tool during the exam – drawn during the 15 minutes you have prior to the test as you run the Prometrics tutorial.

The act of memorizing that mind map helped to organize what I learned in the previous 35 hours of course work I needed to perform before I submitted for exam eligibility (PMP eligibility is 3 years, 4500 hours, and 35 hours of coursework).  I also tended to look in the PMBOK if something in the mind map didn’t make sense.  That helped ground the week a bit.

By the way – memorizing someone else’s mind map stinks.

I would have liked to been able to make adjustments to the mind map on the Tuesday of the bootcamp rather than waiting until late Wednesday afternoon – if only so I could incorporate my newer thoughts (particularly regarding contract types and some trickier quality management concepts) and draw them out more quickly.  I spent more time drawing the mind map during the actual exam than I would have liked – taking about 18 minutes vs the 15 allotted.

3) They control as much as they can control – your food, your breaks, your focus, your time.

Unlike other courses of this type, Cheetah did a few things I have never seen before.

The days fell into a rhythm pretty quickly.

It’s been a long time since I’ve been through an experience quite that intense.  But damn if it didn’t work.
—————
As with most of these certification tests, the trick is to get into the mind of the test authors.

The PMP is notoriously hard because they occasionally enjoy testing whether you have fully read the question (attention to detail).  They also write questions using a wide array of unpredictable source materials – not just the PMBOK.

I got the feeling that they wrote the test in a way to encourage / force people to take a test prep class.

———————–
So now what?  The next round is likely going to be Agile courses and methodology.

Beyond the task of trying to push  my phone number off my business card with letters behind my name – I find that going through these certification efforts provide me with some tools I can use in my own work.

Having something for the resume / LinkedIn profile to show for my efforts is a bonus.

New research finds that those organisations using collaborative learning register significantly higher take up in all other L&D interventions; and
enjoy average engagement scores around 10% higher than those that do not.

In addition, two-thirds (67%) of those surveyed say that a more collaborative approach to working and learning would help boost productivity by at least 5% in their organisation.